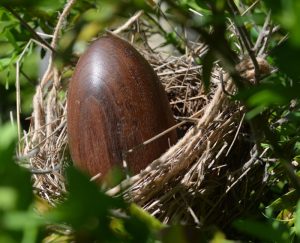 The fifth-grade year is often spoken of as “the golden year.” This title has been given it because of the wonderful place to which fifth-grade children, eleven-year-olds, mature. They are more balanced and poised in themselves than they have ever been before and than they will be again until the completion of the coming years of puberty and its rapid intellectual development.

The fifth grade student continues to explore parts of speech and practice verb tenses. The class proceeds to work on punctuation and sentence structure while writing some of their own compositions based on main lesson content. The teacher may also use dictation as a way for the children to practice compositional skills.

Spelling is practiced weekly. The words come from a combination of main lesson content and spelling rules.

The children are assigned several novels throughout the year about which they will either write a book report or have a comprehension test. Silent reading time is incorporated into the weekly schedule. Oral reports are also an important aspect of the language arts curriculum. The mythology of ancient India, Persia, Mesopotamia, Egypt, and Ancient Greece provide source materials upon which the children draw their inspiration for writing.

Book reports and simple research reports are assigned throughout the year. The research reports are related to the main lesson topic, such as U.S. geography (typically a report on one of the 50 states) or Botany. Students learn basic encyclopedia and library search skills and may enjoy a trip to the local public library.

MATH
The students in grade five engage in more complex fractions studies. They learn skills including multiplying and dividing mixed numbers and mixing the four operations in a problem and are introduced to square, prime and abundant numbers. Decimals are introduced and students learn how to use all four operations with decimal fractions, followed by learning to convert fractions to decimals and vice versa. The teacher may use weekly quizzes and homework to assess the students’ strengths and progress throughout the year.

A large-format area proof of the Theorem of Pythagoras, using grains of millet and derived from an engaging story, makes a great foundation for later work. Freehand geometry is also brought to the fifth grade students.

NATURAL SCIENCE
The study of the plant world begins in grade five. The teacher begins with a higher plant (angiosperm) as an archetypal plant to contrast the lower plants. Through observation and class presentations, the students become intimately aware of the plant environment. This is a time when “from whole to parts” is literal. The class will start with the whole plant and move to learn about its individual parts. The class draws from observation and will draw and paint the plants they learn about.

GEOGRAPHY
In fifth grade, the students branch out from their local geography and begin to study North America, with particular emphasis on the 50 United States. The children are asked to complete a research report on one of the states and present it to the class. Students study such major geographic features as mountains, rivers, lakes, vegetation, and climate as well as natural resources and wildlife. They draw free-hand maps and often model a topographical map of the continent. Students look at how the natural features of a land correlate with the development of its communities while learning songs and poems from North America’s heritage. 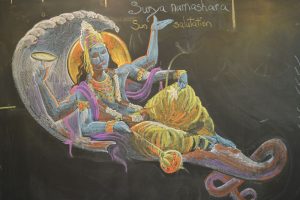 HISTORY
Fifth graders receive an enormous survey of humanity through the culture and history of the ancient Indians, Persians, Babylonians, Egyptians, and Greeks. The students are exposed to the mythology, art, music, food, and customs of these civilizations, building respect and understanding for people of other races and religions through the study of these great epochs in history and their significant figures.

The class also participates with other East Coast Waldorf schools in the Greek Pentathlon.

FOREIGN LANGUAGE
The form of the lesson in fifth grade resembles that of the fourth grade. Work with stories, songs, poems, and dictation continues. The main lesson curriculum includes a block in botany so it is a good time to introduce material about plants, trees, bees, butterflies, etc.

In fifth grade, the children learn the past tense. There are two past tenses in Spanish, both equally important. It is impossible to speak in the past tense without using both the preterit and the imperfect tenses. The teacher does not explain when to use one and when to use the other on the theory that the students learn and experience both in the stories that are read. After they have learned to conjugate the past tenses, the students play games that keep them interested and allow them to apply their knowledge.

EURYTHMY
In fifth grade, simple challenges such as learning to stamp and clap the rhythm of the upper and lower voices (simultaneously) of piano music help to internalize rhythmic operations that are paramount to maximize the harmonization of the child before the influx of the creative and destructive energy of adolescence. Linguistically, as speakers of the English language, the introduction of basic meter such as anapest, dactylus and amphibrachus is vital. In the main lesson, the children are immersed throughout the year in the study of the ancient cultures. The eurythmist attempts to tap into this tapestry of human experience with as great an authenticity as possible. Students are also called on to begin observing the world with a keener eye in preparation for formal education in the sciences. Eurythmy reinforces the need for clarity of gesture and form and the use of copper rods for simple exercises further promotes rigorous and precise activity.

GAMES
Games for grade five focus on the dynamic between the group and the individual, the benefits of cooperation and social interaction. Most important for grade five is the training for the Greek Olympics held in the spring. It is important to choose games that help the child “strive to find the balance between their inner experience and what occurs in the world around them,” based on Games Children Play by Kim Brooking-Payne.