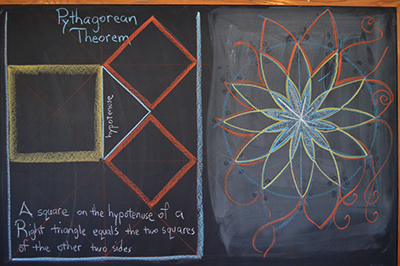 Having crossed the metaphoric Rubicon in third grade, the ten-year-old child stands in a different relationship to the world. The transition from early childhood is complete; the transition into puberty has not yet begun. The fourth grader feels, “I am here. The world is there.” In the midst of separateness and questioning, even defiance, the child’s newly emerging ego consciousness seeks reassurance and uprightness in the world around. The ten-year-old’s zest for life, quest for knowledge and intense desire to socialize can present challenges to some of the established rhythms of the first three years.

The fourth grade curriculum provides the child with many expressions of conflict and separation, of confrontation, indicating paths for healthy resolution and integration. The curriculum draws from two streams: the Book of Humanity and the Book of Nature. In such subjects as history, the child explores the question, “Who am I?” while science allows her to ask, “What is the world?” Some subjects, such as geography, incorporate both, stimulating a healthy “breathing” that can bring inspiration.

LANGUAGE ARTS
The shift now begins to occur from “learning to read” to “reading to learn,” with the children beginning to read for informational purposes as well as enjoyment. Book reports and animal projects are assigned this year and independent writing begins. With themes from the main lesson material, which include Norse mythology, animal studies, Native American studies, and local geography.

Children with reading challenges will have the requirements modified to fit their needs, and everyone is expected to work to the best of his or her ability.

Poems and verses are learned throughout the year and grammar is taught from these verbal, reading and writing exercises. The teacher may introduce dictation as a writing exercise. The children also begin composing sentences and paragraphs in their own words. The new elements of speech that are introduced to the children may include verb tense, prepositions, conjunctions, proper nouns, and interjections, as well as a constant review of the parts of speech that were learned in third grade. The teacher will individually assess each child’s reading progress and will require reading practice at home as well as at school.

The class play may be written and directed by the teacher to imbue and enrich the themes of the year. The children embody the characters they have studied, bringing them alive in their inner life. Fourth grade students are ready to speak their own parts and are cast with character and temperament in mind. The school play is a memorable event that the whole community enjoys.

MATH
The fourth grade student is now familiar with double-digit multiplication and long division, which is practiced throughout the year. Morning exercises include the continuing recitation of the times tables up to 12, typically using a rhythmic element such as short-short-long. A general review of the four processes is also ongoing in a variety of forms, including mental math, worksheets, and work on the board.

Fractions are introduced in fourth grade, which applies all the processes that the children have learned thus far. Using tangible and subjects such as food, bring the application of fractions alive and teaches the important element of sharing into the lesson.

The children learn new mathematical terminology; for example, factor, multiple and denominator with an understanding of the root meanings of these words. With this understanding, they begin to practice the operations and learn the rules of solving questions concerning fractions and factoring.

NATURAL SCIENCES
The fourth grade student considers the relationships between humans and animals, from the spiritual to the practical. Teachers have the freedom to teach out of their love for the subject in a variety of ways, which include the methods that Rudolf Steiner indicated.

The children explore the practice of research by writing a report on the animal of their choice and building a diorama to present. Several animals are also studied extensively through drawing. 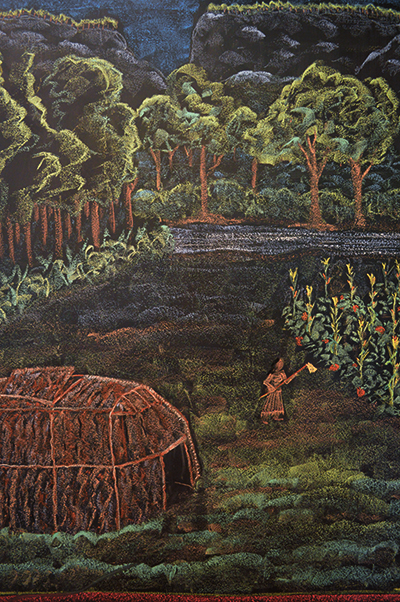 GEOGRAPHY
The formal study of geography begins in fourth grade with an exploration of the students’ immediate surroundings. In the first geography block, the class typically draws freehand maps of their classroom, homes, school, neighborhoods, and town, and they develop a clear sense of the four cardinal directions: north, south, east and west.

The geography lesson asks the students to map their bedrooms, their house, their neighborhood and the route to the school. From there, the lesson moves up the Hudson River, explores the rich history of towns and manufacturing along the way, and ends up back at our school here in New Paltz. The Hudson River provides a link between our local history and geography that is rich in factual and imaginative stories.

In the second block, they move on from our local Hudson Valley geography to that of New York State. They learn how different land formations were created through climate and other changes and how these changes affected the relationship between humans and the land.

HISTORY
In fourth grade, the study of local history and geography begins. History could start with the creation myth of the indigenous peoples of the Hudson Valley and move into the historical accounts of how the European discovery of North America affected the Native Americans. The children hear these stories the first day, recount them the next day and write and illustrate them on the third day.

During the fourth grade study of local history and geography, the mythology of the indigenous people – in this case, the Lenape and Iroquois—is presented, as well as legends and/or stories of the earliest Europeans to settle the land. This once more weaves together the mythic strains of cultural history with the factual documented history of the more recent arrivals to American shores. This braiding together in the lower grades of cultural and historical human experiences becomes the foundation upon which the study of history in the upper grades is built.

FOREIGN LANGUAGE
Fourth grade is an exciting year in the language lessons. The children are now ready to start learning to read and write, and to learn grammar. They begin to keep a Spanish book that is similar to the main lesson book. This is a good year to introduce stories, poems, and songs about animals. From fourth grade on, every lesson covers most of the following aspects: opening verse, song or poem, a few minutes for mental math, grammar and oral work, dictation, reading, and writing.

Reading: The class begins to read in Spanish by focusing on the vowels, which always say their own names. After learning the sound of the vowels the students recite the alphabet. When they become familiar with the letters, they are encouraged to write a well-known poem in their notebooks. This helps them to develop confidence in their ability to read. A story is used to help remember the sounds of the few consonants that are different in Spanish.

Grammar: The curriculum calls for the present tense to be taught in fourth grade, beginning with subject pronouns. Then verbs are introduced by reciting the conjugations in a rhythmic way. Five verbs that are essential for Spanish are introduced: Llamarse, Ser, Estar, Ir, and Tener. If the children can learn these verbs well, they are well on their way towards learning the language.

MUSIC
Musical notation for the recorder may be introduced in fourth grade. Some teachers may begin exploring other voices besides soprano, in preparation for fifth grade ensemble music. The fourth grade continues its work with stringed instruments in the fourth/fifth grade orchestra, which performs before the community twice a year. This necessitates the continued practice of reading music and develops the ability to sight-read.

FORM DRAWING
Celtic knot drawings show the children of the fourth grade how a graceful order is found in the apparent complexities of life. Celtic knot form drawings present interweaving elements of the world that may seem confusing, just as fractions may seem overwhelmingly complex—until the rules are learned. The children gain confidence in learning that if they follow the path or the rule, they come through the maze safely and in an elegant manner. 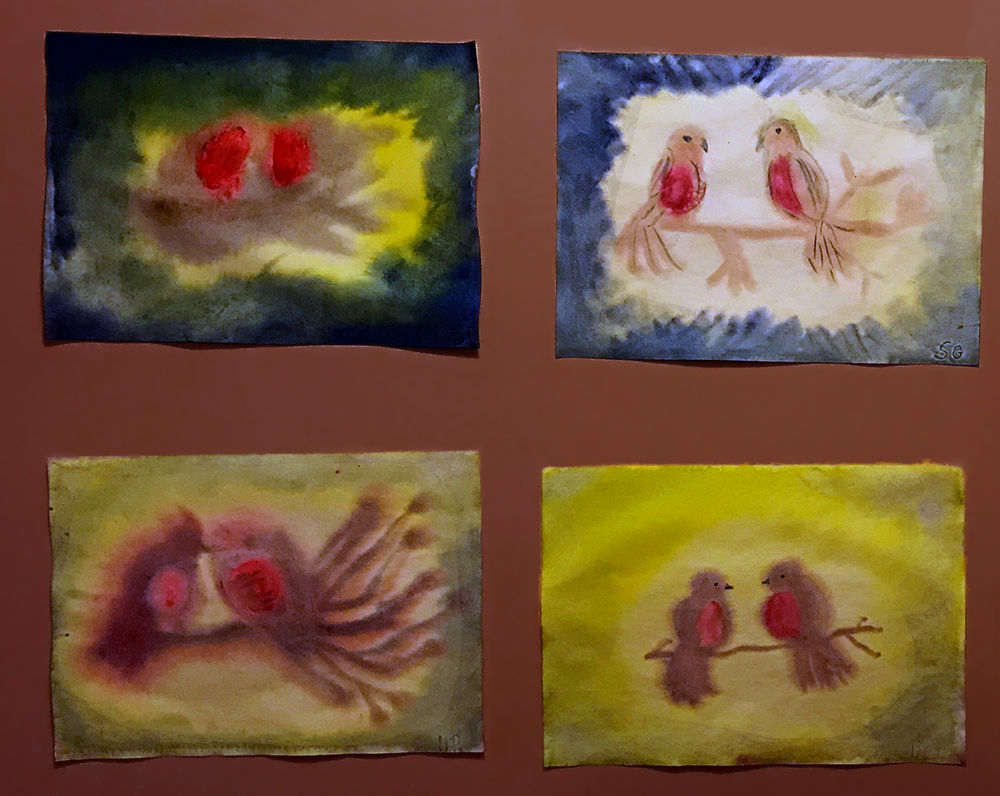 PAINTING
Animal drawing and watercolor paintings of themes pertinent to the lessons also continue throughout the year. Painting in the fourth grade may impart contrasting moods, such as warm and cold, light and heavy, or sad and cheerful. Through these soul-moods, the children explore their inner feelings, as well as find the forms that develop through these contrasts.

EURYTHMY
In fourth grade, the child is now confident in spatial orientation regarding left and right so it is incumbent on the eurythmist to challenge this knowledge to avoid superficial reasoning. With this in mind, the class begins line activities, crossing within lines and facing different directions while maintaining the same footprint. As in the main lesson, where the class teacher begins to introduce fractions, in eurythmy the students work with becoming the notes in 4/4 time dividing equally between eighth notes, quarter notes, half notes, full notes and so on. In forms such as Wir Suchen Uns (We seek one another) a pedagogical form for speed-in-change, four children begin on a square making swift movements from one form to the next, including diagonals and partial ways. In tone eurythmy, tone gestures are brought onto simple forms.

GAMES
Games for grade four are based on the emerging individuality of the child. It is important that children learn how to accept both winning and losing. Games are presented through pictures and rhymes to stimulate their imagination. It is important to choose games that help children build a new emotional structure and that gives an outer expression to the changes they are experiencing.