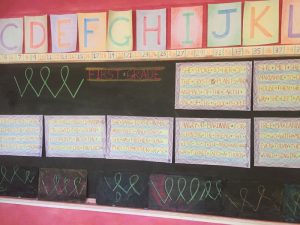 Mountain Laurel Waldorf School strives to make first grade a healthful transition for the children from the rhythms of the kindergarten into those of the grade school, creating a well-balanced template for a three-day rhythm of learning and providing a strong foundation for the children’s academic future.

Academic learning is confined to the morning, so that after lunch the children may rest or sleep and engage in outdoor free play—a reassuringly familiar rhythm for those children who attended a Waldorf kindergarten. This provides an appropriate out breath that allows the children time to digest the rich content of the morning’s activities.

Circle time is the heart of the morning lesson. Initiated in the kindergarten, circle time provides the ideal setting in which thought, movement, and feeling are integrated through song, dance, poems and games. Movement is incorporated into recitation so that the earliest form of literacy (the spoken word) is enlivened with life, breath, and action. Numbers are imbued with rhythm so that they come to life through the children’s limbs as they clap, skip, stomp and jump. 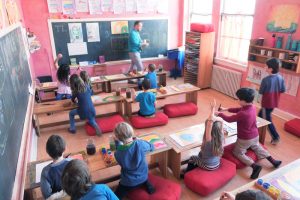 The three-day rhythm establishes a habit for much of the learning in the years to come, as a story told the previous day, having been taken into the child’s sleep life, is recalled by the class then developed and explored in the days that follow in a multiplicity of ways such as drawing a picture from the story, writing-related text, or bringing it to life again through dramatization. This rhythm of learning encourages the feeling life of the child to take an active part in the act of remembering. In first grade, the children create their own textbooks. These reflect what they have learned in class and sow the seeds for the children to be active participants in the learning that will take place throughout the grade school years. 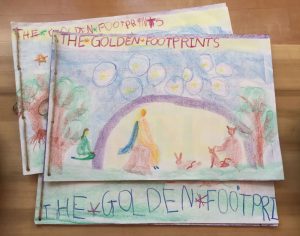 LANGUAGE ARTS
First grade is a time of transition from play to work. Morning circle activities help make the transition from active, movement-oriented learning to the more focused, concentrated and quiet desk learning.

The children experience the bridge from imitation to pictorial thinking through language arts. The very first lessons lead from imitating the teacher’s straight and curved lines as a movement exercise to drawing them on the chalkboard, in the sand, with their toes, with a paintbrush, or by any other means in which the teacher feels inspired to present them. This exercise establishes literacy’s foundation as the children use their mastery of the straight line and curve to eventually master all 26 letters of the alphabet. Each consonant is introduced through the external form elements of a story, revealing a delicious secret— the hidden wave in a ’W‘ or the slithering snake of an ’S’ for example. As each letter is also paired with a fairytale, the letters are living, breathing entities in the soul life of the child. A seven-year-old taught to read in this way hears the “sssssssssssssssssssss” of the snake whenever they look at the letter ‘S’ and remembers, without any effort, the story of the magical white snake that allowed its eater to understand all the languages of the animal kingdom. Vowels are usually introduced differently as the children explore how consonants hold the shape of a word and vowels breathe the life force into it.

Reading is taught through writing, which is introduced through form drawing (straight and curved lines) during the first days of school. Copying text from the blackboard and reading it in unison are the first stages of teaching reading. The teacher may create a “reader” for the class based on the stories they have heard. Word families may be introduced and some students may begin sight-reading.

MATH
In grade one, the qualities of each number from 1-12 are introduced. The class counts up to 100, works with all four operations (addition, subtraction, multiplication, and division) and consistently practices the 1, 2, 3, 5 and 10 times tables. The four operations are presented through imaginative stories. The children practice writing numbers from 1-100, and the time’s tables are introduced through many types of games and movement, such as clapping and stepping rhythmic patterns. Memorization is not expected at this time.

The quantitative aspect of numbers is explored through extensive practice with concrete manipulatives such as glass beads, beans, acorns, and sticks.

NATURAL SCIENCES
First grade honors and nurtures the child’s senses and works to sustain the natural joy and wonder of a child’s experience of the natural world through nature stories, seasonal verses, and songs that enable the children to live into the rhythm of the week, the months and the seasons. In rain or shine, the first grade spends a large portion of the day outside, adapting their creative play to the seasonal environments.

GEOGRAPHY
The beginnings of geography are brought as children explore their immediate surroundings firsthand, as well as through songs, poems, and stories from around the world.

HISTORY
Children are introduced to the cultural history of Western humanity through fairy tales, bringing to light certain universal truths about human nature.

FOREIGN LANGUAGE
The foreign language curriculum is introduced through an immersive oral form of repetition and imitation. Children explore the soul life of other cultures through stories, poems, songs, and games. The teacher strives to reproduce the child’s first year of experience with their mother tongue in contrasting languages and while they are still fluid enough to mimic the native speakers with accuracy and to genuinely absorb the various rich soul qualities that foreign languages have to offer.

First grade will be learning Spanish and German in the 2018/19 school year.

MUSIC
The rich and vital role that music plays throughout the grades at Mountain Laurel is inaugurated in first grade through daily singing and flute playing. Songs brought in first grade often are held in the realm of the pentatonic scale, similar to the Mood of the Fifth from kindergarten, as they gradually branch out towards the full scale that will be introduced towards the third grade. The songs of first grade hold a central and joyful role in the life of the children and bring nourishment to the soul life of the class. Songs are learned by ear and orally and visually imitating the teacher. Through singing and playing flutes together, the class learns valuable social lessons as a group—listening to each other, holding a song together, and being attentive to the teacher’s signals. The foundation for musical fluency begins here, which is so vital to individual achievement in the upper-grade years. 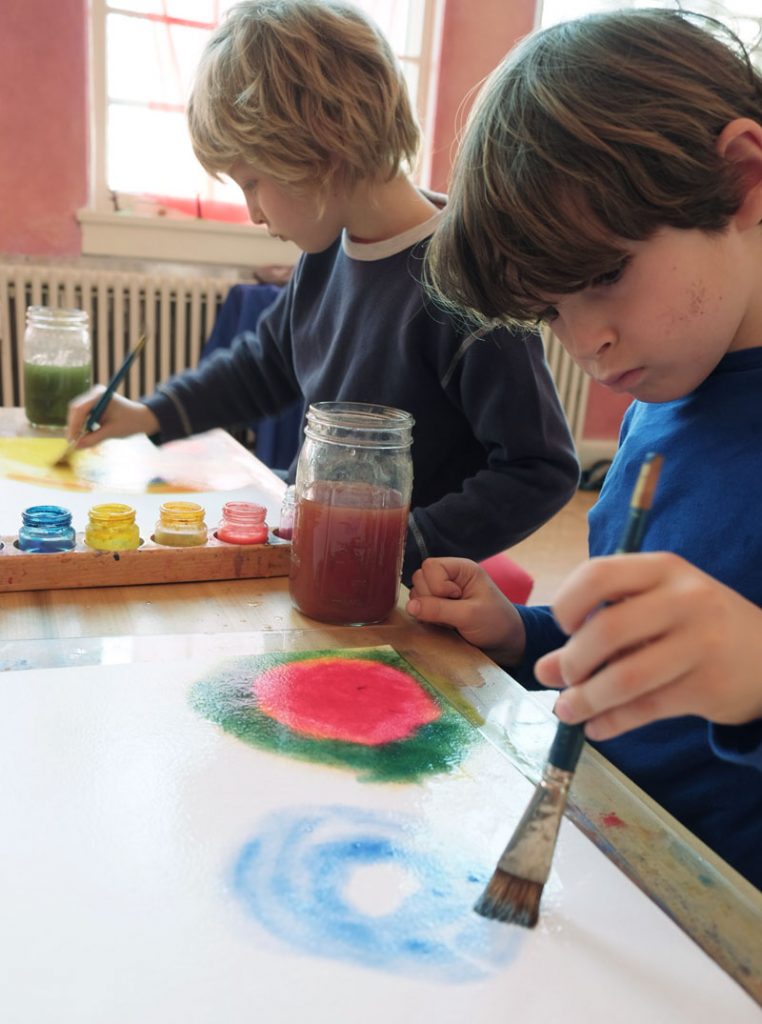 PAINTING
First graders engage in the study of color through wet-on-wet watercolor painting. Each painting experience is preceded with a story that brings mood and personality to the colors. The children are encouraged to playfully explore both the properties and personalities of individual colors and the relationships between the various colors. The emphasis here is on the inner experience of the child and less on external form elements, which come later.

HANDWORK
Handwork plays a vital role in strengthening and supporting the will life of the children as they transition to a more academically rigorous school life. The first grader will begin by making their own knitting needles before going on to knit kittens, gnomes, bunnies and balls. Eighth-grade buddies often will come to help the children master knitting in their first year.

EURYTHMY
Children in first-grade eurythmy, as in the main lesson curriculum, are introduced to the straight line, the curve, to vowels and consonants. Gestures and forms are practiced through imitation, almost as if in play and, in this way, the class learns basic group movement, such as circle forming. Simple dances that encourage waiting and partner work are woven in, giving a chance for restraint and levity. Considerable energy is spent successfully moving squares and triangles with transitional movement in small groups and establishing geometric integrity as a whole.

Eurythmy will be brought to the children in two blocks in the 2018/19 school year.

GAMES
First-grade games are presented by the main lesson teacher as part of the morning circle work as well as by language teachers as a means of engaging the active will of the child in learning new vocabulary. Beanbags games, clapping games, and rhythmical walking are typically utilized in extra main math classes as well as the initial circle time period.

Outdoor playtime provides the out breath of free play. Children are given the appropriate setting and time to create active and imaginative scenarios that encourage the organic development of such abilities as problem-solving, compromise, and collaboration. Between the large sandbox, tree house, swings, balance beams, stumps for leaping between, and wood for constructing, there are ample opportunities for active movement. Jump-rope, tag games, building and winter sledding are all popular options for free-play in first grade.