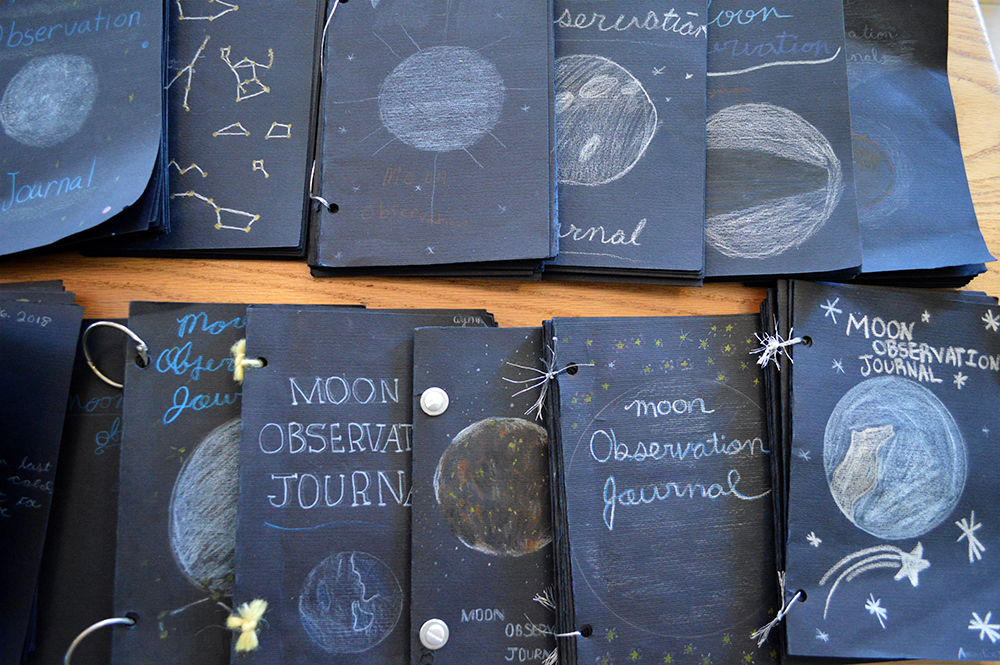 Teaching changes significantly in the sixth grade to address new conceptual capacities that are awakening in the children as they approach adolescence. The curriculum, as well as the needs of individual students, becomes increasingly complex over the next few years. The new and often chaotically emerging individuality of the pre-adolescent yearns to find a place in the world that is unique and recognized and respected by others. The sixth grade is a firm, intentional step into the outer world. It is an arrival upon the earth. Changes in the physical body as the children approach age 12 become noticeable. There is an increased awareness of gravity and weight; hormones begin to affect the feeling and emotional life as well as physical maturity; differences between male and female development become a source of interest. The themes explored over the course of this school year are chosen expressly to assist both the inner and outer questing of these young people.

Sixth grade main lesson blocks include history (Ancient Greece and Rome), science (geology and physics) and geography (Central and South America). Geometry is also covered either through running lessons or as a separate main lesson block.

Students engage in the daily recitation of poetry, play recorder music, sing songs, paint, create artistically rendered geometric drawings, read a variety of books and perform a play—all of which relate to some aspect of the sixth grade curriculum.

LANGUAGE ARTS
In sixth grade, the students hear stories from Greek, Roman and medieval history. These are discussed, recounted, dramatized and written down as the subjects of compositions and dictations. Historical novels and biographies are used as the reading material. The students are assigned written book reports on some of their outside reading.

With the study of physics, the students write objective descriptions. The students practice writing down their observations of experiments done in class. In contrast to these objective descriptions, they are also encouraged to write in poetic form about what they have learned. Research reports such as an in-depth look at a particular Central or South American country are assigned in order to help deepen the children’s understanding of the curriculum. Through the study of the paragraph, the sixth graders learn to build a composition. Rules for punctuation and grammar are reviewed. The students should know the eight parts of speech and be able to use nouns and pronouns as subject and object, work with comparative adjectives and adverbs, and with possessives. They continue to study verbs and verb tenses, spelling, vocabulary, and diction, which are usually related to the main lesson subject.

MATH
Math in sixth grade covers the review of fractions and decimals, percentages and geometry with one block dedicated to business math. During this block, students learn or review percents and utilize knowledge of percents in calculating sales tax, interest etc. Some other explorations may include running a class business, balancing a checkbook and learning to budget. Students learn the interest rate formula as a beginning to algebra studies. Some classes begin a study of algebra and signed numbers through a meeting with Mohammed and the rich Middle Eastern civilization of his time.

Geometry is taught as a separate main lesson block or as a running lesson throughout the year. Students learn to use the tools of geometry: a compass, ruler, and protractor. They draw various geometric constructions and learn to bisect lines and angles. The Pythagorean Theorem is expanded upon and geometric proofs are introduced in the sixth grade as a means to prepare the students for a more in-depth study of theoretical geometry in seventh grade.

The metric system is introduced.

SCIENCES
Physics, astronomy, and geology are the sciences traditionally covered in sixth grade at Mountain Laurel.

In the physics block, the students are involved in demonstrations of acoustics, optics, the effects of heat and cold, static electricity and magnetism. The approach is phenomenological: students observe and carefully describe the phenomena the teacher presents in these areas and come to understand the conditions that need to be present for these phenomena to occur.

During the astronomy block, the constellations visible in the region are presented through myth and story. Often the Greek myths are the template through which the constellations are presented. Students learn to orient themselves in space through “naked eye” observation of the sun and stars. They also learn to track movements of the celestial bodies by continual observation of sky Phenomena.

In the geology block, students learn about the physical structure of the earth, the formation of igneous, sedimentary and metamorphic rocks, and some of the common minerals and crystalline structures. They also study the use and location of various rocks, minerals, metals, and fossil fuels. Student work may include drawings of various geological formations, written summaries, collecting and identifying rock samples, painting scenes, modeling crystal forms in clay and growing crystal gardens. This block lends itself well to on-site field trips to study the geological formations as they actually occur in real life.

GEOGRAPHY
The study of geography expands its circumference from the United States to include all of the Americas. Students explore Latino culture through its art, literature, handicrafts, music, and history and are assigned a particular Latin American country to research in-depth.

Travel diaries provide a means for creative writing to spring forth from the factual information that the students gather, allowing them to engage with the fruit of their research on a feeling level. Students may share what they have learned with the class through oral reports and learn to draw accurate maps. This block may also include the study of the ancient civilizations of Central and South America, such as the Mayas, Aztecs, and Incas. Since the Spanish language is studied at Mountain Laurel, the class teacher and the Spanish teacher cooperate to present the content of this block.

Each student completes and presents a country report. The thread of cause and effect runs through much of the year’s curriculum—the interdependence of natural resources, wildlife, and vegetation; connections between geology, astronomy, and weather. Students become more aware of mineral resources, rock formations and various types of landscapes and study climatic zones. Here they see the relationships of air and water currents to the landscape along with the movement of the earth around the sun as important factors in the measuring of the land.

HISTORY
The sixth grade continues to delve into world culture. Ancient Greece provides the transition between the mythological history of humankind’s cultures that formed the framework of studies in fourth and fifth grade and factual history rooted in historical records that will be the mainstay of historical studies for the remainder of the upper grades. A study of Homer’s Iliad provides the perfect segue from the mythological to the historical time period.

Weaving larger-than-life biographical figures into the dramatic flow of history is central to the history covered in sixth grade. The class examines the rise of Sparta and Athens through the figures of Lycurgus and Solon, the Persian Wars through Darius the Great and Xerxes of Persia, and the Peloponnesian Wars through examining the great figures of that time, such as Pericles and Socrates.

The Greek history block generally culminates with a study of the life of Alexander the Great. Roman History is studied from the founding of Rome through the Age of the Seven Kings, the Roman Republic and the establishment and expansion of the Roman Empire. Rome provides a perfect segue from the age of the pagan gods to the birth and spread of Christianity throughout Europe. The Roman kings and emperors (Romulus, Julius Caesar, Augustus, etc.) provide excellent material for the biographical studies that form the foundation of historical study in the upper grades. Students may be assigned a particular emperor to research and report on. Drawing accurate maps, such as maps of ancient Greece, Alexander’s Empire and the Roman Empire provide an important link between the history and geography studies of this year’s curriculum.

FOREIGN LANGUAGE
In the sixth grade, the learning of the language undergoes a considerable change from the oral repetition of poems, songs, and some grammatical concepts, to include written application and practice. During this year, the students write the rules for when to use “ser” and when to use “estar” (to be). They are given a more extended vocabulary and learn to form simple sentences using the parts of the sentence, subject, subject-pronoun, noun agreement, adjective agreement, articles and conjugations of regular and irregular verbs ending in ar, er, and ir—in the present, preterit, and perfect past tense.

Students use the workbook Senderos to reinforce what they are learning in class. Homework is assigned at least two days per week. The students also have the opportunity to write a report on a Latin American country, draw a map and present it to the rest of the class. In the sixth and seventh grade geography blocks, the students study the Spanish speaking countries in North, Central and South America, Spain, Cuba, Puerto Rico, and the Dominican Republic. The classes observe some of the cultural traditions from Guatemala in celebration of the different festivals throughout the year such as “Semana Santa” (Easter), “Dia del Nino” (October 1st Children’s Day), “Dia de Todos los Santos” (November 1st), “Los Barriletes Gigantes” (The Gigantic Kites, which fascinates the students), “Las Posadas” (The Days before Christmas) and “Navidad” (Christmas). 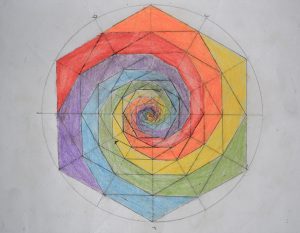 EURYTHMY
The sixth grade has one eurythmy lesson per week in the community room accompanied by piano. One could argue that sixth grade marks the summit of childhood intelligence and the base camp for the ascent into adulthood. The child is extremely capable and wants to be challenged. Eurythmy is blessed to have many difficult and beautiful geometric forms especially for the purpose of refinement and flexibility of thinking at this age. As the individual becomes adroit in his or her thinking, the children as a group begins to question their interpersonal dynamics and moving together, as always, becomes a lesson in democracy. In yearlong practice, extensive use of counter-rhythm in rod and concentration exercises encourage the children to strengthen and flex the soul. All this early adolescent transformation leaves the sixth grader needing humor to lessen the stress of change. Here again, eurythmy utilizes the simple truths of movement such as rhythm, concentration, skipping and rod exercises to enliven the students and to help them collectively shake off the day.

GAMES
Grades Six, Seven and Eight
After the focus on “personal best” that is the mainstay of the fifth grade Olympic preparations, the middle school students are encouraged to expand their striving for individual excellence to encompass a sense of team identity. It is hoped that the foundations of teamwork, camaraderie, and sportsmanship laid down in the early grades will allow for a healthy progression into mainstream sports without falling prey to the shadow-side of organized sports in our culture; cheating, showing off, violent conflicts and low self-esteem among the less naturally gifted. Above all, the central goal for the students is to have fun with their classmates while getting exercise.